The function began by the performance of a class 5 student, Iqra Basharat, who recited some Biblical verses. After that, Sumera Murad of class 5 uttered Naat (song for Hazrat Muhammad PBUH). Asher Emmanuel, the stage secretary, introduced the guests.

Nadeem Samuel (ROD) spoke about URI, its aims, structure, motives and achievements. He said that URI is an International Campaign for creating peace amongst different religions.
“At the dawn of the 21st century, there is a new spirit of peace emerging throughout the world. People of all nationalities, religions and ethnic backgrounds are coming to recognize that we are a part of the family, sharing one precious planet. Whatever are the differences, we can all agree that peace on earth is good for everyone, as well as the highest calling of all our religions”, he said.

Samuel said that URI Pakistan has been a leader in promoting and celebrating the international day of peace as well in conveying URI principles and preambles, affirming that ROD also is a part of this international peace campaign.

Ferhan Mazher, Chairman (Rays of Development Organization), told the children about the activities of URI. He said that United Nations started it off desiring to bring harmony in all religions and casts.
“The 2008 IDP offers a particularly strong opportunity for support by people of faith, because September 21, 2008 falls during holy month of Ramzan”, Mazher said.
URI encourages Muslims to organize ‘Peace Aftars’ to break their fast on this evening, and to have the announcement at the Dhohar prayers, he said. URI encourages Christians to organize the IDP in church services and ring church bells at 12 noon, he said.

Rev. Zahid Kamal thanked URI and all the participants as well as the public. He stated that URI and ROD are doing a wonderful job. He informed the students that differences are to be celebrated and not
hated. Let us celebrate diversity and individuality.

Madam Zareena, the Principal of Christian Primary School, thanked URI and ROD for organizing the program, and said that such programs are very beneficial for the upcoming generations as they provide them with awareness, understanding and alertness.

About 150 students attended the function with teachers Tooba Emmanuel and Fouzia Auston. ROD CC URI brought sweets and candies, which were distributed amongst all the students. The students belonged to different religions; Sunni Muslims, Shia Muslims, Ahmadis and Christians. All the children in the end stood, holding playcards in their hands, on which ‘MAY PEACE PREVAIL ON EARHT’ was written. Then all the community in that school raised slogans:
May peace prevail in Pakista
May peace prevail on Earth 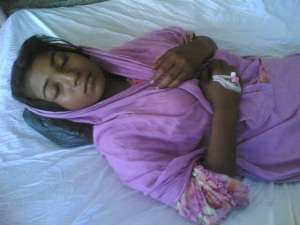 SARGODHA, PAKISTAN: In Chak # 43 NB Sargodha, Sana Masih, an 11-year-old domestic worker at the house of Mohammad Shafeeq was held and raped by her employer of five months on September 1 that also was the first of Ramadan (Holy month of fasting for Muslims).

The employer, Mohammad Shafeeq, 60, is a retired Captain and was serving as an officer in NADRA before retiring. He is living with his wife Gulraiz Bibi, whereas all his children are settled abroad in USA.

Sana was found by the roadside the next day ‘in an unconscious and terrible state’. The neighbors recognized her and informed her family.

From there she was taken to the mini hospital in DHQ, Maula Bakhsh Hospital, where she is still under treatment.

Tahir Naveed Chaudhry MPA Punjab proclaimed that “I will appeal for this case of the innocent especially in the Punjab Assembly. We will not let any stone unturned and will punish the culprit severely which will also teach others a lesson.”

From the team of Rays of Development Organization (ROD), Chairman ROD Ferhan Mazher, Imran Mazher, Nadeem Samuel, Noman Sharjeel and I (Khadijah Shah) was present on the spot. Ferhan Mazher stated, “The innocent victim is still unconscious. Her eyes, arms and legs are swollen due to strong drugs and the abuse she bore. In Pakistan, though justice is difficult to be served and in the matter of minorities it is far more difficult. No one can provide any treatment to the patient on the ship which is about to sink. Same is the condition of Pakistani minority women.”

Shahbaz Bhatti, Chief of APMA assured that he will go beyond his powers to protect and get justice for Sana. “I will raise this issue in the National Assembly” Bhatti said.

ISLAMABAD: To condemn the inhuman prevalant practices of violence against women, with special focus on the recent case of burying alive of five women in Balochistan in the name of honour, a roundtable is being held at the Council of Islamic Ideology (CII) today (Saturday).

Organized jointly by the National Commission on the Status of Women (NCSW) and the CII, the roundtable meeting will be attended by human rights activists, representatives of civil society and journalists. Minister for Parliamentary Affairs for Balochistan, Robina Irfan will also be in attendance. Other panelists for the roundtable include I.A Rehman, Ansar Abbasi, Naeem Mirza, Tahira Abdullah, Samar Minnallah and Dr Arifa Syeda.

To examine the religious status of such practices, religious scholar Allama Khilji will also speak on the occasion. Chairman CII Dr Khalid Masood is to kick-off the event. Talking to ‘The News’, Gender Expert
at NCSW, Sofia Noreen said that the meeting was aimed at highlighting the typical way of covering up cases of honour killing.

“The meeting will discuss the history and mindset behind such practices and political, social and religious dynamics involved in making such practices acceptable in the tribal system.”

She said that it was important to comprehend the standing of religion on the issues and the mindset that allows such heinous practices in the name of tradition. “Discriminatory customary practices are
protected by a certain mindset and there is a need to point out these elements and raise voice against them,” she said.

Dr Nasir Zaidi of CII said that the idea was to condemn the case like Jafferabad through a joint platform. “Participants of the roundtable would present recommendations on how to put restraint over unjust customary practices and these recommendations would then be presented before the CII central meeting,” he said adding that finally those recommendations would be given to higher authorities. On July 14, five women were brutally tortured and buried alive in Roopashakh, Goth
Qaboola at the border of Naseerabad-Jaffarabad because three of them had the courage to opt for court marriages of their own free will.

Hameeda, Ruqqayya and Raheema are three of the five victims who were killed in the name of honour.

Related Content
Gendercide in Pakistan: Women are a colonized population!
‘Violence Against Women’? No! GENDER-CIDE in Pakistan!
Women Slam Govt Against ‘Honour’ Killings

Support the demands to:

- Separate religion from the state